I've gone through numerous understandings, tinkerings and levels of enthusiasm concerning alignment, and read plenty of other bloggers do the same. It was interesting to see Gary's own take on alignment, at least as he sets it out in the DMG.

Gary begins by explaining what alignment is and some basics about how it works: it is the general "ethos," of a character. It doesn't determine religious views, though it may be determined by religious views, and it doesn't prevent characters with the same alignment from fighting with each other, though similarly aligned opponents are likely to cease hostilities and team up with each other against opponents of different alignment.

In AD&D, Gary differs from the single-axis, "allegiance in a grand cosmic struggle," D&D definition of alignment so common in the OSR and instead sets out alignment as a roleplaying aid, a compass to help players run their characters well and in such a way that they do more than just ask, "what would I do in that situation," and go with that. In Gary's own words, "alignment describes the world view of creatures and helps to define what their actions, reactions and purpose will be. It likewise causes a player character to choose an ethos which is appropriate to his or her profession, and alignment also aids players in the definition and role approach of their respective game personae."

In AD&D, there are now two axes for alignment, Law-Chaos and Good-Evil. Gary casts Law as being about the group over the individual; the group needs order and organization to survive and function. Spock was being supremely Lawful when he said, "the good of the many outweighs the good of the few or the one." Chaos in AD&D, far from being the existential threat to the cosmos it is in D&D, is merely promoting the individual over the group. Good is basically about valuing the rights of others, while Evil is about accomplishing one's goals without regard to the rights of others.

Gary goes on to describe each of the possible nine alignments. Nothing is particularly surprising when one realizes that each alignment is just a synthesization of two points on the two axes, except that I found it interesting to read Gary's descriptions of Evil alignments. Gary describes Neutral Evil characters as basically social Darwinists, believing in the success and survival of the fittest and the failure and extinction of the weak; Lawful Evil sees Law as a mechanism for subjugating those who are weaker, the epitome of classism and racism; Chaotic Evil values individual desires and volition… so long as the individuals who have them are strong enough to bring them into reality and defend them. Ultimately, "might makes right," seems to be the unifying theme of Gary's understanding of Evil.

Gary stresses that it is important to chart the alignment of characters' behavior, using a chart in the PHB. He doesn't go into much detail on this point and I'm unclear on whether that chart is this chart that I've seen multiple times before: 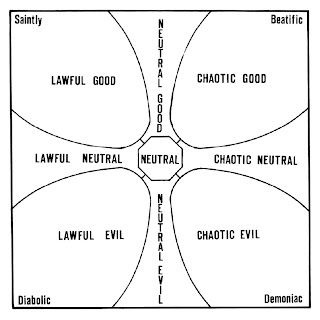 or something else. If it's this chart that Gary is talking about, I'm not sure how he expects "small shifts" to be kept track of. Charting character behavior on the alignment chart is important because some classes require certain alignments and because there are serious consequences to actually changing alignment.

Gary takes alignment so seriously that he states, "failure to demand strict adherence to alignment behavior is to allow a game abuse." Gary offers as an example of such game abuse a Paladin who is conveniently led away from the party while the rest of the party schemes to poison a monster; the Paladin isn't stupid and, if played according to alignment, would not turn a blind eye to that sort of behavior, but the players play their characters that way because it is convenient. Gary argues that the Paladin's player should be told that turning a blind eye towards obviously non-Lawful behavior will cost him his Paladinhood and if the player continues to act against alignment then the DM should follow through and strip the Paladin of his Paladinhood.

Gary goes on to discuss alignment languages. He draws parallels with Thief's Cant and the Catholic Church's Latin, but it's clear that there are no strict real-world parallels with what he is describing. Alignment languages are not complete languages; their vocabularies are well-developed concerning the main topics of the alignment, but very bare in all other areas. Thieves can discuss casing and stealing to no end, but a discussion of literature is out of the question; Druids can discuss plants and weather, but not politics. Gary's examples of Thieves and Druids discussing things with their alignment tongues makes me wonder just how many alignment tongues there are; are there nine, one for each alignment? More? Less? Nine seems to generally fit what Gary is saying, as it seems that any intelligent creature, even Gold Dragons, isolated from humanity, can speak the tongue of their alignement. It is taboo to speak in an alignment tongue in the presence of anyone not positively known to share that alignment.

Gary suggests not informing players that there are consequences for changing alignment, letting players cross into other alignments and then penalizing them. I've read and heard complaints about alignment from the players' side that make much more sense to me now that I've read this. I mean, how would you react if you were playing your character according to how you understood your character's alignment, all the while moving closer and closer to alignment change because the DM interpreted your actions differently but wasn't telling you that, and then, all of a sudden, out of the blue, the DM tells you, "you just changed your alignment; congratulations, you lose a level!"? I actually argue for keeping alignment secret from players in this post, but with less drastic consequences, especially for players who play classes that aren't aware of alignment; I think it's important for players of classes that depend on alignment to have at least an in-game understanding of how things work if they are going to suffer consequences for their actions. Gary's approach, as far as I can tell, is "gotcha-ism," pure and simple; I understand that Gary apparently DMed with unrepentant, shameless power-gamers, but this, I think, crosses the line into dysfunctional adversarial gaming advice.