On Tuesday I made this: 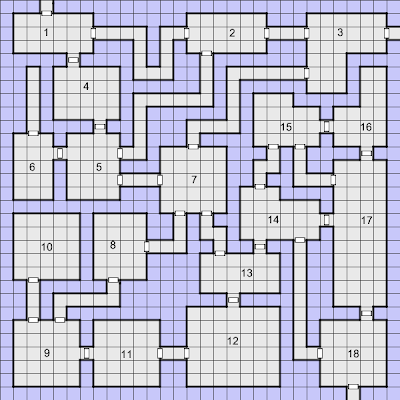 And today I made this: 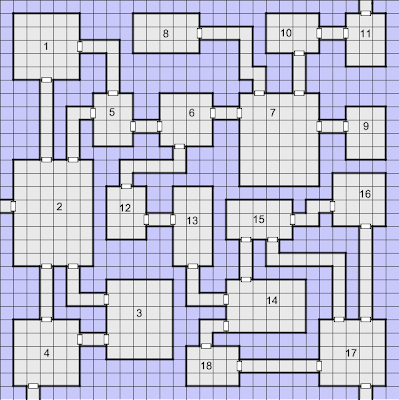 These are the areas of my megadungeon my players are likely to explore tomorrow. I've begun stocking them, but there are quite a few rolls on tables left before they're totally ready. Fortunately, rolling on tables is almost all that's left.

The one other thing is my first placed encounter. These are the second important part of stocking a megadungeon, the first being randomly generated and placed encounters. I want this area of the first level to be inhabited by the Coeurl.

The first thing I'm going to do is have the Coeurl be an item on the wandering monster list for this area. If I roll a 1 on the chart, instead of using a Random Esoteric Creature, I'll use the Coeurl. Per Paladin's suggestion, the Coeurl won't attack, instead covering himself in darkness and telling the PCs about a monster that owes him somewhere a few levels down. What kind of monster? I'm not sure yet. I'll have to add figuring that out to the list of things I have to do between posting this and the game tomorrow.

Then I have to place the Coeurl's lair. I think I'll place him in room 6 of Area 7. He strikes me as the kind of character that would want multiple escape routes if attacked. That also means that the Coeurl's lair cuts off access to the right side of this area. I don't know what all of the implications of that will be, but it should be interesting.

I've also got some news to report on the "big ideas" front of the megadungeon. I woke up from a nap this last week with "the Mews of Methas" going through my head. I think my subconscious was probably trying to say "maws," but I looked up "mews" and found out that it means either a stables or a place where bats roost. Combining these two ideas, I figure one of the purposes of the dungeon (if not the original purpose) was to house the warbeasts of Methas, whoever that was. Three-headed, four-winged, genetically altered mammalian monsters sound pretty cool. I think I'll have them turned to stone. If the PCs can figure out how to un-stone and tame one, they could have a pretty sweet mount. I'm not sure if I want to have just one or a few left behind after the Mews was cleared out, or if I want it to be fully stocked. This will be quite deep, though, so I have a while to figure out the specifics. It's a good idea to start dropping hints as to the history of the Mews right now, though.

Posted by Christopher at Thursday, September 15, 2011