Having preliminarily established the three essentials of the dungeon (random tables, underlying ideas and mapping), now it's time to start mapping level 1.

Now, obviously, the Old School thing to do is to "Jaquay" my dungeon, which is to say, try to make it as non-linear as possible, in all three dimensions.  The way I see it, that means both a myriad of entrances and exits and a myriad of ways to go when actually inside the dungeon itself.  It's also important that there be "choke points," for two reasons; one is that an overabundance of choice is disorienting to the players- I know this from experience- and the other is that it provides challenges- if players want to get somewhere, there are only going to be a few ways to do it- if the passages on this level are too well guarded, they might have to go a level or two down and see if they can come up in the middle of the area.

The Alexandrian has written a few posts on Jaquaying an already-created-but-too-linear dungeon, but how can I go about creating a non-linear dungeon from scratch?  The key, to me, seems to be to work with circles, not lines.  Overlap a lot of circles and I'll get a lot of intersections; the lines correspond to passages, the intersections to rooms, and there's no one "start" or "finish" to the whole affair. 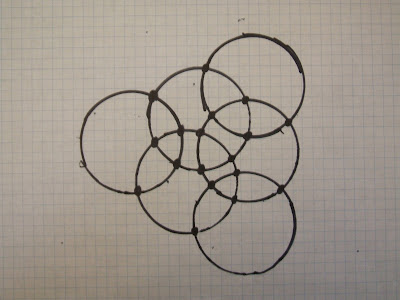 This, in turn, can be reduced to this, which, for me at least, is much easier to work with: 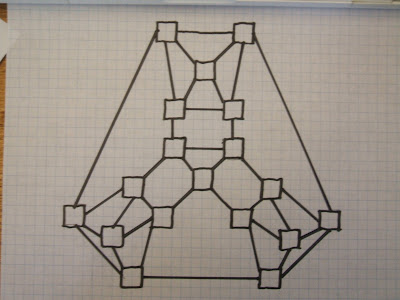 (Telecanter could probably swipe this for a really complex version of his faction hierarchy charts if he wanted to. No sense in not re-using stuff, right?)

Now, I can't have too many passages running all over the place; I need some choke points.  The way to do that is to eliminate some lines.  The simplest way is to get rid of each of the "outermost" lines, leaving exactly 30 lines remaining.  The important thing isn't really which lines I arbitrarily remove, but that I get to a number of lines that corresponds to the possible outcomes from the roll of one or more dice, in this case a d30.

So, arbitrarily taking those six "outside" lines out, I'm left with this: 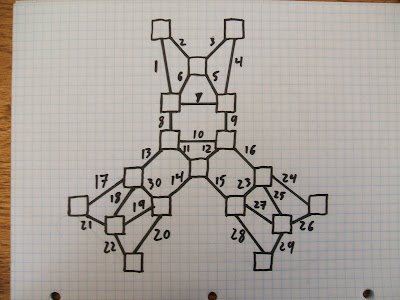 The numbering is somewhat haphazard, especially since I missed a line towards the bottom left on my first pass through and had to label that "30," but that doesn't matter because I'm only using these for random rolls anyway.  The idea is that I'll remove whatever connections I roll on a d30. The number of times I roll is pretty arbitrary, but depends on how big or small I want the map to be.  If I want a smaller map, I roll more times, eliminating more connections. Nodes with only two connections are streamlined away into just being part of the connection, making the map smaller.

Actually, this is the third set of rolls I made; I didn't like the first two. That's the thing about random dice rolls- I'm totally allowed to discard results that I don't like.  In this case, both of the dice rolls cut off the top "branch" from the bottom branches.  I considered going with the dice and making this a split level, but decided against it because this is the first time I'm doing this and because there wasn't an even spread of rolls, resulting in large areas where no connections would be eliminated.

So, I eliminate these connections.  I'm also going to eliminate those areas that now only serve as a stop-over between two other areas, but for now I'll just re-draw them as dots, so you can see what I'm doing. 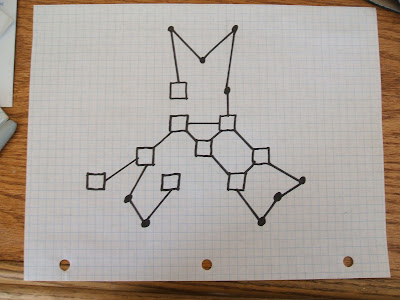 So, now I can reduce that into this: 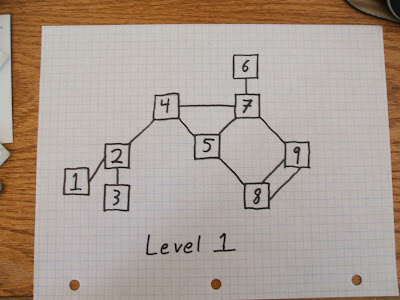 This is my "big idea" map for Level 1.  Each area will be distinct and will have certain unique characteristics. Different monsters, different feel, different function, etc.  I'll start filling that out in the next post.

Posted by Christopher at Monday, February 21, 2011