So, I now have nine areas of my dungeon's first level to map out.  Looking back to my preliminary side-view multi-level map, I see that my first level needs to have five exits/entrances: The "front door" that is the "standard" entrance to the dungeon, the tower, the teleportation column, the passage to Level Two and the passage to Level Four.  I've decided to put the Front Door in Area 4; that will be the first area I start mapping.  Areas 1-3 look like they would make a nice area for the kobolds to control; the teleportation column will in one of those areas, probably Area 1.  The passage to Level 4 should be out of the way, so it goes in Area 6.  I think I'll put the tower in Area 9; because it is the alternate way to get onto Level 1 from the surface, choosing it should provide a meaningfully different experience when entering the dungeon. Choices should be real in the sense that they affect things. I think I'll put the passage down to Level 2 in Area 8.

So, now to mapping actual rooms and hallways.  I'm going to take this an area at a time and start with Area 4. Area 4 will be most players' introduction to the dungeon, as I plan on making the tower more inaccessible than the Front Door. As far as non-randomly placed NPCs, the only ones I'll place in Area 4 is a group of kobolds at the Front Door demanding a toll.  They'll be somewhat Tuckered, armored and have some attack rats with them- a serious threat to a party of 1st level PCs.  This encounter will let the PCs know that the kobolds have power in the dungeon and that they achieve this power by controlling choke-points.  It will also allow the PCs to begin their relations with the Kobolds. Depending on how the PCs interact with the Kobolds, they may become allies, enemies or merely business associates.

Other than that, I'm not going to place any organized, intelligent or particularly powerful monsters in Area 4, though they may be encountered there as the result of a wandering monster roll. So far as placing monsters goes in this area, I plan on doing that randomly.

Since I want a larger map, without any rooms taken out, I'm going to roll only six times to eliminate passages.

Resulting in this map:

I'm not eliminating rooms that only serve as a way-point along a passage-way between two other rooms because I want to maintain a high number of rooms.  As I'm doing this now, each area will hold 18 rooms, for a total of 178 rooms on Level 1. Spiffy!

I now take this map and re-arrange it some- reshape the rooms, vary the length, and straightness of the hallways, make one passage secret (should I make more passages secret? I'm not sure) and add two dead ends. I also designate which rooms will have passages leading to the areas Area 4 has connections to, and which room the Front Door leads to and I number the rooms and hallways.  I try to fit it into a 30 by 30 square space so I can use the 1 Page Dungeon style for each area, which I think will add immensely to the convenience of this dungeon. 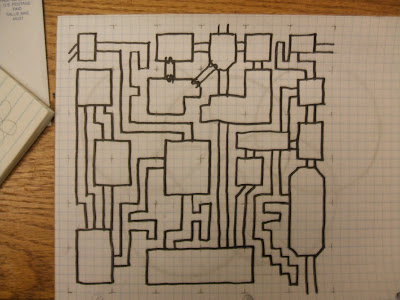 Now I go over to Dungeonographer and create the map. I add in a bunch of dead ends in what would otherwise be solid stone/empty space, and also discover that my hand-drawn map wasn't true to what I'd actually rolled (around room 18), so I fix that. Also, I discover that it is time-consuming and hard to have anything other than right angles in Dungeonographer, so I take those out of the map for now. I'll see about figuring that out another time. For now, this is what I have: 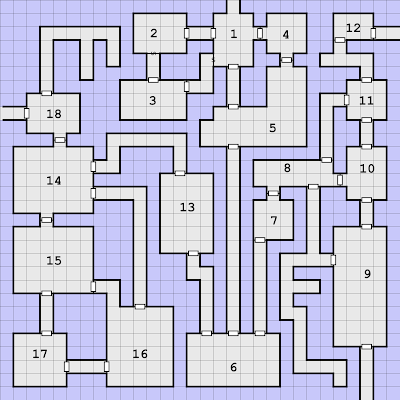 Quite simple and bare-bones, but not bad, if I do say so myself. Now I stick this in the top-left corner of the OPD template and next time I'll work on stocking this map!

Email ThisBlogThis!Share to TwitterShare to FacebookShare to Pinterest
Labels: Foray into Dungeon Building