So, we've got the random tables generally sketched out and the underlying ideas for the dungeon sketched out in an even more loose way.  Time to actually start mapping.

First off, I'm going to see about mapping multiple levels, from the side.  This is something even Swords and Wizardry, which doesn't have a single random table in the dungeon creation section, says to do- in fact, Swords and Wizardry devotes a whole page to a side-view map of a 10 level dungeon.  I don't know how many levels I'm going to aim for in the end, but Gygax and Arneson say here that I should start off with at least three levels.  I think I'll do one better than that and go with four levels to start off with.

I envision the foundation or centerpiece of this dungeon as a huge column of the teleportation complexes I talked about last time, with each dungeon level generally shooting off in one or more directions from that level's teleportation complex.  This makes it pretty tough to map, but I'll take a shot at it. 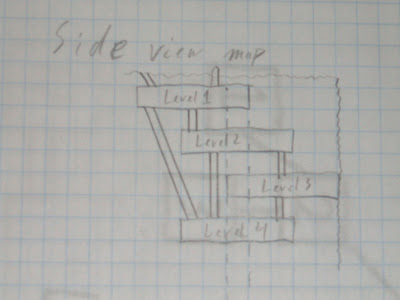 Well, that wasn't actually so bad. I started by drawing a dotted-lined column down the center of the map.  That is where the teleportation complexes will all be.  Then I drew the levels in, having them rotate around the column, so Level 4 is between the viewer and the teleportation column, while the column is between the viewer and Level 2, if that makes any sense.  I drew in the connections between the levels, but purposely drew them so that they made sense in 2D- there was room for them on the graph paper, but they don't necessarily make a whole lot of sense in 3D.  The prime example is the stairway or chute from Level 2 to Level 4.  In 2D, on the map, it looks great.  Thing is, in 3D, Level 2 and Level 4 are on opposite sides of the teleportation column from each other.  This means that the transition from Level 2 to Level 4 is going to be pretty long.  I should probably make it a slide or chute, to hurry it along.  This also makes it one way… I like that.

Then I remembered that I wanted this dungeon to be by a cliff, with some of the levels accessible from the cliff face.  I decided to draw in the cliff, as well as the surface.  It looks like every third level will have an exit on the cliff face.  Drawing in the surface also gave me the idea of a tower rising up through the surface from the first level, so I drew that in as well.

So, now I've got a side-view map of the first four levels of my heretofore un-named dungeon.  Next time, I'll see about mapping the first level itself and how I can make it "Jaquayed."

Posted by Christopher at Monday, February 21, 2011